Ordnance Training Detachment Unit History Weapons Support Radar Mechanic, MOS 29B, was established in Fort Sill after moving from Fort Monmouth, NJ around 1970. Fire Finder systems’ training was originally conducted by military instructors and Soldiers graduating from the course received an Additional Skill Identifier (ASI) for completion of this course.

In 1984, Surveillance Radar Repair moved from Fort Huachuca, AZ to Fort Sill and was combined with MOS 29B to redesignate as Branch Radar Division, Target Acquisition, MOS 39C. The Division was later named the Radar Training Detachment.

In 1995, Army Training and Doctrine Command (TRADOC) reaffiliated the former Signal Corp MOS to the Ordnance Corp. Once the move was completed the MOS was redesignated as 35M. This training was mainly conducted with initial entry training students and a few Soldiers who switched MOSs. In January 2000, MOS 35C and 35M were combined.

In 2005 the MOS 35M was redesignated as 94M, Radar Repairer. The Radar Repairer Course Phase II lasts a total of 33 weeks and 4 days. To graduate Phase II and be certified as radar repairer, 94M students must demonstrate, through written and hands-on testing, a proficiency of troubleshooting the AN/TPQ-36 Fire-Finder radar, AN/TPQ-37 Fire-Finder radar, and the AN/MPQ-64 Sentinel radar. Students are also introduced the Light Weight Counter Mortar Radar system.

The Patriot Training Detachment was originally established at Fort Bliss, Texas on 1 October 1986. Noncommissioned Officers developed the Patriot Intermediate Maintenance Program of Instruction (POI) for the 24T (T5) to train prior Radar or Missile NCOs for Intermediate Maintenance (IM) repair of the Patriot Radar System.  April 1987, the first class of students graduated after completing fifty-nine weeks of training. In 1989, MOS 24T ASI T5 changed to MOS 27X, still training prior Ordnance and Air Defense NCOs. In the mid 1990’s, MOS 27X opened to all MOS(s) for transitioning students and NCOs who possessed a GT score of 110 or higher.

In the year 2000, the MOS 27X was opened to Accession Soldiers (Initial Entry Training students). Currently 99.9% of all Soldiers attending the course are Accession Soldiers with no required maintenance background. The course is also offered to international students from multiple allied countries.

Also, in July of 2000 the Patriot Training Detachment began teaching the new POI, System Configuration 3. May 2002, the school began teaching Identification Friend or Foe and instituted a Field Training Exercise (FTX) in the POI. On 1 October of 2004, the 27X MOS was re-designated as 35S. On 1 October 2005, the MOS 35S was re-designated as 94S. The Patriot Missile System Repairer Course Phase II lasts a total of 38 weeks and 4 days.

With the establishment of the Sustainment Center of Excellence (SCoE) and relocation of the Ordnance, and Transportation Schools head quarters to Fort Lee, Virginia, the SCoE has become the center of gravity for the development of Sustainment Warriors. The Patriot Training Detachment was also moved from Fort Bliss, TX to Fort Sill, OK and was organized under the Patriot/ Radar Training Division, under the command of the Ordnance Training Detachment. 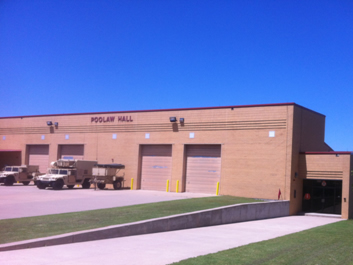 The facility that houses training for our future Soldiers was named after one of the most decorated Native American Soldiers in history, First Sergeant Pascal C. Poolaw Sr. As stated in the write up for his fourth silver star, Poolaw continued moving among the troops, making sure they were positioned properly, pulling casualties back to the lines despite being wounded himself. His service was selfless and sets the example for all students who attend this facility.

A Veteran of World War II, the Korean War and Vietnam, First Sergeant Poolaw was four times awarded the Silver Star, the Nation’s third highest military medal, for Gallantry in action. He received 42 awards and decorations in total for his service. He began his distinguished Army Career on 27 August 1942, fought through the war in Europe, and earned a battlefield commission in Korea. He relinquished this to resume his old rank of First Sergeant. He was killed in action in Vietnam on 7 November 1967 while rescuing a wounded man during a search and destroy mission with Company C, 1st Battalion, 26th Infantry, 1st Division.