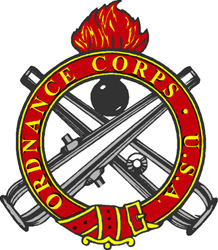 The earliest evidence we have for the design of the Ordnance Regimental Crest dates back to a uniform button from 1833. The origin of the design is unclear, but by the mid-19th century it was used on almost all official Ordnance Department documents. Additionally, the design was used by the former federal armories and arsenals. It is one of the oldest insignia designs used by the U.S. Army.

In 1950, the wording was changed to read 'Ordnance Corps U.S.A.'. With the reestablishment of the Ordnance Corps on 28 October 1985, it was an obvious insignia to choose as the regimental crest.

According to the Army Institute of Heraldry, the crossed cannons represent the Ordnance Corp's early relationship to the Artillery. The Shell and Flame (a.k.a. the Flaming Bomb) represents the armament of days gone by, while the energy it connotes is applicable to the weapons of our own day. The cannoneer's belt, which encircles the flaming bomb and crossed cannons, is embossed with the words 'ORDNANCE CORPS U.S.A.' and represents the traditional association between munitions and armament. The white background symbolizes the Ordnance Corp's motto, 'ARMAMENT FOR PEACE.'