Rosie the Riveter more than a poster girl

In 1942, Westinghouse Company's War Production Coordinating Committee created a series of posters to encourage support for the war effort. One of these posters became the 'We Can Do It' poster. This image was based on a United Press International wire service photograph taken of Ann Arbor, Michigan, factory worker Geraldine Hoff who worked as a metal-stamping machine operator. In later years, this image would be associated with the Rosie the Riveter legend, however this image only appeared for a few weeks to Westinghouse employees in the Midwest in 1943. An Ordnance Department Women Ordnance Worker (WOW) bandana is clearly visible on her head. This image has largely replaced the Norman Rockwell's image of Rosie the Riveter.

The other half of the Rosie the Riveter story begins with a song inspired by Rosalind P. Walter who worked on the night shift building F4U Corsair fighters. Redd Evans and John Jacob Loeb wrote the song performed by many artists, but most commonly associated with big band leader Kay Kyser. Subsequently, Norman Rockwell's image of Rosie the Riveter received mass distribution on the cover of the Saturday Evening Post on Memorial Day, May 29, 1943. This image became very popular and was used throughout the war in war bond drives. To the WWII generation, this image embodied Rosie the Riveter. The 'We Can Do It' image only became the common image in the 1980s.

However, despite the multiple images of Rosie the Riveter, women were an essential contribution to the war effort! So what did Mommy do in the war? She made:

Those who were involved in the production of military hardware became known as WOWs which stood for Women Ordnance Workers. These women, symbolized by Rosie the Riveter, wore hardhats and coveralls, and pulled the same load as many of the men they replaced. They operated heavy cranes, milling machines, and countless other heavy tools that most women had never heard of before the war. The WOWs also bagged gunpowder, made weapons, crated ammunition and did whatever else was asked of them so that their fathers, husbands, sons, and sweethearts could win the war and come back home again. 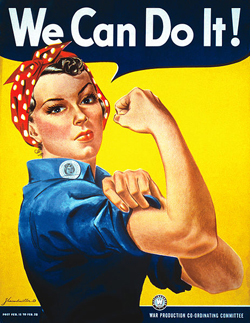 The "Rosie the Riveter" movement is credited with helping push the number of working women to 20,000,000 during four years of war, a 57 percent jump from 1940. About 300,000 women were employed in War Department activities in November 1943. The WOW bandanna became a well-known symbol of the 85,000 women who worked directly for the Ordnance Department.

In fact, an advertisement in the July-August 1943 issue of Army Ordnance, noted:

"... and she wears the WOW bandanna. Water Repellent. Washable. Dust Proof. The "WOW" Bandanna, designed in accordance with U.S. Army specification, is an attractive, safe, and unifying head covering to identify Women Ordnance Workers. About 27" square, it is available either in Ordnance red with white Ordnance insignia, or in white with red Ordnance insignia. Every woman in your plant will want one--it's a "WOW" for morale! $3.75 per dozen, net F.O.B., New York. Manufactured under authorization from the Army Ordnance Department. We invite your inquiry. BRIAN FABRICS CORPORATION, 1441 BROADWAY, NEW YORK CITY."

The role of women in World War II did not end with temporarily replacing the men in civilian jobs. In 1942, Congress established the Women's Auxiliary Army Corps, or WAAC as it was known. Several hundred thousand women volunteered to "free a man to fight." They were issued uniforms, and replaced soldiers in clerical and other non-combat related jobs. The WAACs had no official military status until it was granted by Congress in 1943. When the WAACs officially became part of the Armed Forces, their name was changed to the Women's Army Corps (WAC). The WACs not only served as clerks, they also drove trucks, tested weapons, and ferried bombers and other aircraft across country and overseas. The more mechanically inclined repaired and maintained tanks and other tracked and wheeled vehicles.

While it cannot be said that the jobs held by the WOWs and WACs were as dangerous as those of the combat soldiers, the simple fact is, that many of their jobs were more dangerous than the ones held by many of the men overseas. While many of the men were behind the lines serving the war effort as clerks, cooks, bakers, supply and maintenance personnel and staff officers of all types, many of the women were working in shifts around the clock bagging gunpowder and manufacturing artillery shells, and other high explosives. They suffered the effects of spray painting, welding, hanging from single suspension scaffolds and shooting hot rivets into the hulls of ships under construction, working with all kinds of dangerous chemicals, and many other equally hazardous jobs. While the risk of being killed or wounded by the enemy were nil, the risks of injury and death they faced were often equal to those faced by the men overseas.

Many of the women pooled their efforts in raising their families. They formed into groups and shared such chores as cooking, cleaning and washing clothes. many who had young children shared apartments and houses so they could save time, money, utilities and food. If both worked, they worked different shifts so they could take turns babysitting. For many, this sharing and cooperation that was born out of the demands placed on the women of World War II created life-long bonds among them.

Life on the home front brought special challenges as they coped with rationing and shortages. Clothes, many food items and a host of other commodities were scarce. Tires and gasoline were rationed, as were meat, shoes, and anything made of metal. On top of that, those with children were constantly worried about their little ones getting sick. Illnesses that were readily treatable during normal times, often became serious because of the medical shortages. Antibiotics such as penicillin were particularly scarce.

But they continued to work. And through their efforts support for the soldiers never lagged and they contributed to the victory in the "war to end all wars." And they changed the workplace forever.