History of the Shell & Flame

The Shell and Flame (a.k.a. Flaming Bomb) has been used by European armies for several centuries before adoption by the U.S. Army. In fact, it is still used by many countries in Western Europe, i.e. the Grenadier Guards in Britain. The insignia represents not a bomb, but an iron hand grenade with a powder charge and a fuse which had to be lit before throwing. 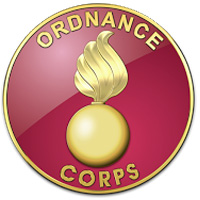 Despite its sole ownership by the Ordnance Branch, multiple designs of the Shell and Flame existed. Different designs accompanied different uniforms. The 1851 Uniform Regulations, in addition, granted enlisted personnel the opportunity to wear the Shell and Flame, previously only Officers wore the emblem. The dress uniform, the forage cap, the enlisted uniform, and many other uniforms had their unique design. Most Officers emblems were sewn onto their uniform, while Enlisted soldiers had brass insignia affixed onto theirs.

The multiplicity of designs continued through WWI. Indeed, with the deployment of the American Expeditionary Forces in France and the advent of collar disks with branch insignia, a dizzying array of designs existed. Even today, it is still unknown how many different designs were produced. Designs in the U.S. had a tenure of approximately ten years before a new insignia was designed for a particular uniform. In France, however, soldiers employed a wide-array of French manufacturers to make their uniform items.

In 1936, the Army Institute of Heraldry redesigned and standardized the design of the Shell and Flame. This stylized Shell and Flame remains the current version. Interestingly, all older versions were allowed to be grandfathered out of use. It is not uncommon to see photos of WWII Ordnance soldiers still wearing the pre-1936 design. There are portraits of Officers wearing the pre-1936 design up until 1962.