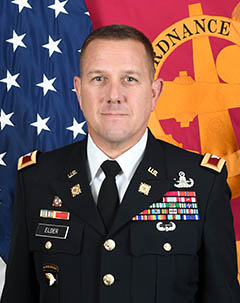 Colonel Stephen Elder currently serves as the Explosive Ordnance Disposal (EOD) Commandant under the Chief of Ordnance at Fort Lee, VA. Immediately prior to this assignment, he served as the Garrison Commander of Fort Jackson, SC from June 2017 - 2019.

Colonel Elder is a native of Dexter, Missouri and is a 1995 graduate of Southeast Missouri State University where he earned a Bachelor’s of Science Degree in Industrial Engineering. In 1995 he was commissioned as a second lieutenant in the Ordnance Corps and became an Explosive Ordnance Disposal Officer in 1999.