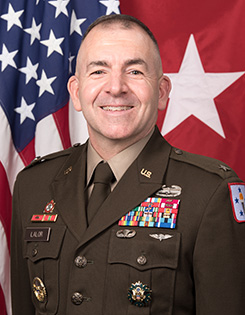 Brigadier General Michael B. Lalor was commissioned into the United States Army through the ROTC program at the University of Scranton, Scranton, Pennsylvania, in May 1995. Entering military service from his hometown of Goshen, New York, Brigadier General Lalor has served throughout the U.S. Army in a variety of troop leadership and staff assignments.

Brigadier General Lalor led the Army Medical Logistics Command from its activation in September 2019 to July 2021. In August 2020, he took on the role of Executive Director for the Enterprise Business Systems, Multi-Functional Capabilities Team (EBS-MFCT), driving the Army's EBS-Convergence modernization mission. He will continue to lead the EBS-MFCT as the 43rd Chief of Ordnance.