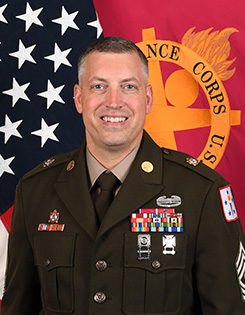 Command Sergeant Major Jason E. Decker is a native of Iron Mountain, Michigan. He enlisted in the National Guard on December 16, 1996 as a 31U Communications Technician. While attending College at Northwestern Technical College in Green Bay, Wisconsin, he enlisted in the Active Army as a 63B Light Wheeled Vehicle Mechanic on February 23, 2000.