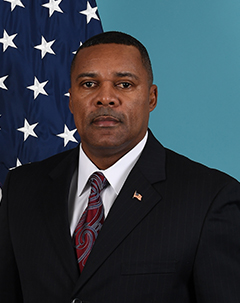 A native of Rocky Mount, Virginia, Kirby enlisted in the Army in 1988 and completed over 20 years of military service before retiring in 2009.

In his current role as Deputy to the Commandant, Kirby serves as the primary advisor to the Chief of Ordnance and Commandant of the U.S. Army Ordnance School on all matters pertaining to budget, management, development, conduct, and resourcing of education and training for Active and Reserve Component Soldiers and Civilians in the Ordnance Corp.

Kirby holds a Master’s Degree in Education from Northcentral University and a Bachelor of Science Degree in Human Resource Management from American InterContinental University. He graduated all levels of the Non-commissioned Officers Education System, culminating with the U.S. Army Sergeants Major Academy (Class #57). In 2016, Kirby completed the Continuing Education for Senior Leaders Course (CESL), the highest level of the Civilian Education System. He was also awarded a certificate of completion for the Senior Executive Fellows Program, June 2019, John F. Kennedy School of Government at Harvard University, Executive Education.

He is a recipient of the Distinguished Order of Saint Michael and the Order of Samuel Sharpe.